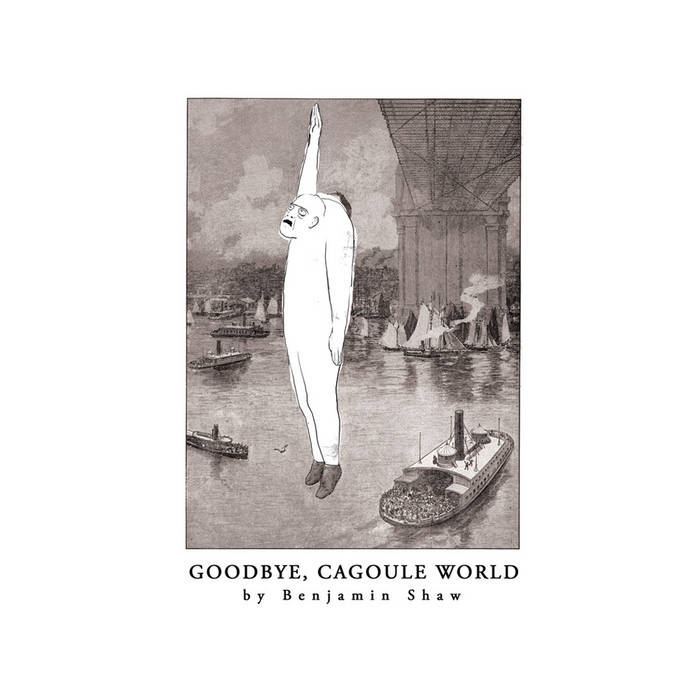 Rick Pono Impressed by the melancholy world of Benjamin Shaw . A lot of melody, a bit of sadness and beautiful compositions that defy any attempt at classification . Great record! Favorite track: No One.

Me and the Horse I Rode In On

The new album from Benjamin Shaw. Back in black. All the fuzz and dissonance that your mother warned you about...plus beauty, woe and good humour.

"'Goodbye, Cagoule World' is a messy, miserable comedown that may just provide the most beautiful moments you share with music all year." - THE MUSIC FIX

"Shaw may be pop's outsider - something many outlets noted upon his entry into the world of music (Clash even called him a freak, though they meant well) - but with this release, he shows a faint desire to join the central fold. Perhaps it's due to resolute defeat, but still, that counts, right?" - THE 405

"...a definite contender for album of the year." - CRACKLE FEEDBACK

"Benjamin Shaw doesn’t so much wear his heart on his sleeve as beam it into the sky like a sort of troubadour superhero...It’s a rich and honest album, and one well worth exploring." - ECHOES & DUST

"Several things are certain in life - death, taxes and that Benjamin Shaw is a total mess." - YOUNG GOLD TEETH

"With a voice that sounds like it was scraped from the bottom of a well at the bottom of the world, Benjamin Shaw is an unlikely candidate for making purely beautiful music. And yet the langorous, delicate "Goodbye, Kagoul World" is just that." - KDHX

"Embrace this record, ‘cos it’s a true crafted thing of beauty, and no ball of sentimental aerie fluff.." - GOLDFLAKEPAINT

"The arrangements on this record are nothing short of masterful..What Benjamin Shaw has done here, is create something that demands a few hours of your time, something unique." - 7BITARCADE

"Those who hang around long enough will be rewarded by a record of subtle beauty, endearing disorder and genuine human sentiment." - SHOUT4MUSIC

"Shaw's distinctly smart and singular voice -- whipsmart and deeply affecting, and we're using "voice" in the figurative sense here -- puts him in the rarified company of non-hitmakers of the day including Krill's Jonah Furman or Los Campesinos!' Gareth Paisey." - CLICKY CLICKY MUSIC BLOG

"Shaw’s managed to carve out his own fascinating musical niche over the last few years by not pulling his punches, and this unflinching honesty is endearing...if you can bear it, Shaw’s music is often richly rewarding, and his latest album is no exception." - THE DIRT & THE ROOTS

"I have no choice but to hope that Benjamin Shaw remains undiscovered, a rare and precious treat that me and a few other miserable fuckers can pass around to each other as proof of our heightened but unappreciated sensitivity." - RIGHT WHERE YOU ARE SITTING NOW

"Shaw intricately draws vivid pictures of emotional scars and escapism with nothing more than subtle weighted vocal tones and sepia tinged, cracked lo-fi instrumentation." - GOD IS IN THE TV

"Throughout the all-too-short running time of the album, you get the feeling this is exactly the kind of pop music troubadour that John Peel would be fully behind – deliciously dark, compellingly creative and wonderfully weird." - SPECTRAL NIGHTS